The spotlight is on Whiting Foods Star Card program

The Star Card is an incentive program where employees are handed a scratch off card when their manager witnesses them doing something good.  It can be anything that earns them a card; for example, spending extra time with a client, having perfect attendance for a week, making or exceeding quota, having a positive attitude, being safe in the workplace, etc.  Whatever issues you have identified  that you want to improve with your workforce, that's what you focus this program on.  Because your employees are immediately rewarded and recognized for their behavior, it acts as a positive reinforcement.  Winning prizes can range from cash to a paid half day off to logo items from your company.   The non-winning cards can be collected and entered into a drawing.

"This program works because it's about

In the video above, Ken Whiting talks with MSNBC about how to motivate a workforce. He took the budget Whiting's Foods would have normally spent throwing an end of the year party and instead spent it on Star Cards that are used daily.  The employees didn't have to wait 12 months to be rewarded anymore; instead, now some of them received cards weekly or even daily!  Whenever the employees were seen by a manager doing something positive, they were rewarded on the spot with a  Star Card.  Their behaviors and attitudes changed quickly.  Employees became motivated, energized, and aware of workplace safety.  As a result, the company became more productive and profitable. 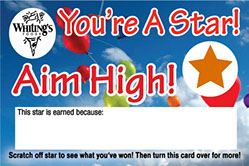 The Star Card Program won 1st place from the IAAPA as the Best Reward & Recognition Program.  The Star Cards were also featured on MSNBC!

The International Association of Amusement Parks and Attractions awarded the Star Card contest it's highest honor as the best incentive program for employees.

This program is so effective, that we have taken the Star Card design and concept and made it available to any of our clients who wants to use it.  Choose from numerous Star Card layouts and then we will customize the card for you. You can now use a proven incentive program.  Delivery within 1 week!