Cleveland, OH -- Scratch Off Works was selected to produce custom scratch off games for the hit TV show Let's Make a Deal.  The game pieces were used live on air during multiple episodes by the host Wayne Brady and the studio guests. These games were the hit of the night!

How the scratch off games are played on air:

The game is called Let's Make a Deal Lotto.  One contestant is called down to the stage with Wayne Brady to play the game. The contestant faces a board of eight numbers that resemble a lottery ticket (these are the cards Scratch Off Works printed) and then is given a giant coin with which to scratch off the spots on air. They must pick three, trying to match pictures of either the on-air talent, or two car symbols. After the first two pictures are revealed, Wayne offers the player a small prize as a "sure thing" to avoid the risk of the player leaving with nothing. In the first season, matching anything but the car won $3,000. In Season 2, matching two "Waynes" won $1,000; two "Tiffanys" $5,000; and two "Jonathans" a "joke" cash prize of less than $200. In Season 3, two Waynes are worth $5,000 and two Tiffanys are worth $3,000 (two Jonathans still are worth the joke prize). In season four, Wayne's face has become the "joke" prize, while Johnathan's is worth $5,000 and Tiffany's remains $3,000.

These scratch off games exemplify how Scratch Off Works is able to completely customize a promotion for you using custom scratch off printing.  The cards were a custom die cut size with an outside measurement of 7.5" x 9".  Printed on a heavyweight gloss card stock, they were also printed full color beneath the scratch area, so that when the scratch off was removed, the winning "prize" was a full color photo of either cars or different celebrities' faces.  In order for the photographs to be attractive on air, the gold metallic ink needed to be able to be scratched off completely clean - leaving no residue on either the piece or on the show contestant's hands.  That would never look good on television!  This type of game card could only be successful using scratch off ink.  Labels would never work for something like this.  We used a gold metallic latex ink with a double PMS (red and white) overprint for the numbers. The cards had a number that ran from 1-8 printed on top of the scratch off area.  Each number randomly corresponded to a different photo that was printed beneath the scratch area.  Since the game show contestants had to guess which numbers matched which photos, the ink absolutely had to cover what was printed beneath it.  Under the bright studio spotlights and scrutiny of close up camera angles, our ink provided the security and the opaque coverage Let's Make a Deal needed for this project.  The custom scratch off cards were a huge success and ordered again the following season!

If you have a custom scratch off printing project, please call us.  Our expert team is here to help! 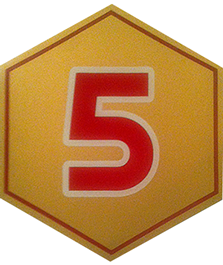 The scratch off game cards with a metallic gold latex ink and a PMS red and white overprint. 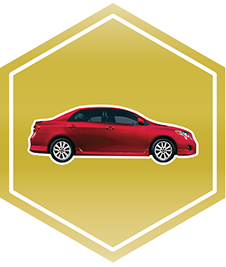 The game piece once it's scratched off, revealing the full color car and a PMS matte gold underneath.